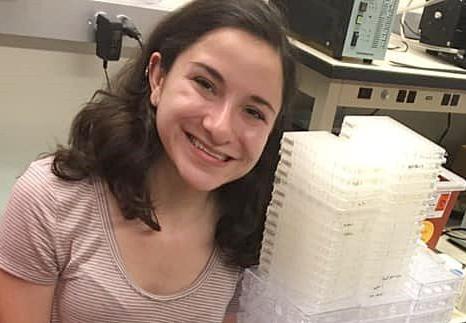 On February 18th, at approximately 12:55 pm PST, the rover Perseverance touched down on the surface of Mars. Within moments, initial images of the Martian surface reached us on Earth, revealing a seemingly barren and dry environment. Despite this initial appearance, many scientists believe Perseverance’s landing site, Jezero Crater, could have previously supported life. Jezero Crater contains mineral deposits that indicate it had a water lake, complete with a dried riverbed delta, somewhere around 3.5 billion years ago. On Earth, we know that microorganisms like bacteria can form structures called stromatolites in dry riverbeds. In fact, these structures are the oldest signs of life on our planet, and the Australian riverbeds where they were discovered look very similar to the Martian surface (see pictures). Scientists are hoping that the similar looking dried riverbed of Jezero might have preserved any similar evidence that microorganisms once lived on Mars.

The arrival of Perseverance to search for microscopic fossils in Jezero Crater is the latest development of a century’s old pursuit for Martians. In recent years, despite data from the Voyager and Cassini spacecrafts suggesting water oceans on Jupiter’s moon Europa and salt oceans with potential hydrothermal vents on Saturn’s moon Enceladus, our fascination with Mars has continued. So why exactly are scientists so hung up on Mars when there are plenty of other, potentially more promising places to check out? The answer, to a large degree, is a deep-rooted historical fascination with the Red Planet. Let’s take a look back at the search for life on Mars, and the important lessons it has taught us as Perseverance sets out.

Perhaps one of the most stunning things about Mars is how similar it looks to places on earth. If you showed someone the latest images from Perseverance and asked where they were taken, you might look at the reddish rock-strewn landscape and conclude the photos are from Arizona, or the riverbeds in Australia where stromatolites were first found.

In the late 1800s, Percival Lowell, an American astronomer and mathematician, became intrigued with the similarities between Earth and Mars. He particularly noted the reddish color of the landscape when viewed through the telescope, suggesting the environment would be similarly arid to the deserts of Arizona or the Sahara, but much colder given its further distance from the sun. Despite these possibly inhospitable conditions, Lowell became convinced that Mars was home to an advanced but desperate culture, struggling to survive on the cold and dry landscape. The main reason for his claims were a series of canals he saw on the Martian surface via telescope, which appeared as regular lines leading from the poles of the planet to dark spots that varied with the season. Lowell argued that these patterns were too regular to be caused by nature and could be explained by struggling civilization which had built canals to bring water from the ice caps to the rest of the planet. He thought the dark spots at the ends of the canals, which varied with the season, might be some sort of vegetation or oasis fed by the waterways.

In part thanks to Lowell’s canals, we earthlings obsessed over the idea of an ancient and advanced society struggling to survive on Mars throughout the 1900s. Works of science fiction from HG Wells’ War of the Worlds to movies such as Mars Attacks! furthered the idea of technologically superior Martians invading earth to escape their dying world. The idea that Mars was once a haven for life like Earth before turning into a dry and cold mass furthered interest in figuring out if Mars had life previously, and if so, what went wrong. Scientists, writers, and philosophers alike wondered if our own planet would follow a similar trajectory to the Red Planet. Throughout the early 1900s, scientists used spectroscopic data (trying to figure out the chemicals on Mars from earth using information in light and electromagnetic waves) to argue that Mars might have once been hospitable.

Then, throughout the 1960s and 1970s, we started to learn a great deal about Mars. NASA’s Mariner program revealed the first close up images of the Red Planet and information about its atmosphere. These stunning images revealed Mars to be as cold and dry as Lowell predicted, but with no discernable canals, oasis, or other signs of advanced life. The five Mars rovers, culminating with Perseverance, concluded the same thing. These rovers, including Perseverance were designed to look for relatively simple life: single celled organisms like bacteria, not the type of complex individuals who could build canals to water a thirsty planet.

There is an important lesson to be learned here. Although our current fascination with potential life on Mars is fueled by new theories and data, its origins can be traced back to Lowell’s obsession with canals which was in turn fueled by years of careful observation. If Lowell’s canals aren’t on Mars, what exactly did he see? And how sure can we be that our observations now are correct?

Many scientists, psychologists, and historians have put forth a wide range of explanations for Lowell’s mistake. Some point out that many scientists at Lowell’s time couldn’t see the canals to argue that he was actually observing the vasculature in his own eye reflected in the telescope or some other optical illusion. Others argue he just really wanted the canals to be there, and so this is what he saw. There is some support for this idea: Lowell was looking for the canals first described a few years earlier by Italian astronomer Giovanni Schiaparelli- except Schiaparelli had never actually believed they were manmade objects. He called them “canali,” meaning “channels” and suggesting a naturally occurring feature such as a river. When translated into English, the term was mistaken for “canals,” implying an architectural phenomenon built by someone or something. After reading about the “canals” on Mars, this is exactly what Lowell saw.

Science is often presented by its very researchers as an objective and unquestionable truth. But science is in fact done by people; it is a human endeavor, subject to all of the same mistakes, biases, and preconceptions as any other personal affair. Whether we are looking at Mars through telescopes or high-tech rovers on its very surface, we must always remain aware of our own personal biases and gather as much different evidence as possible to back up our ideas. When a claim is as hugely influential as suggesting life beyond our planet, the evidence behind it must be equally substantial. The perseverance of scientists to search for life on Mars, now with advanced rovers, moves us a step closer to getting this evidence.

This article originally ran on elkodaily.com.