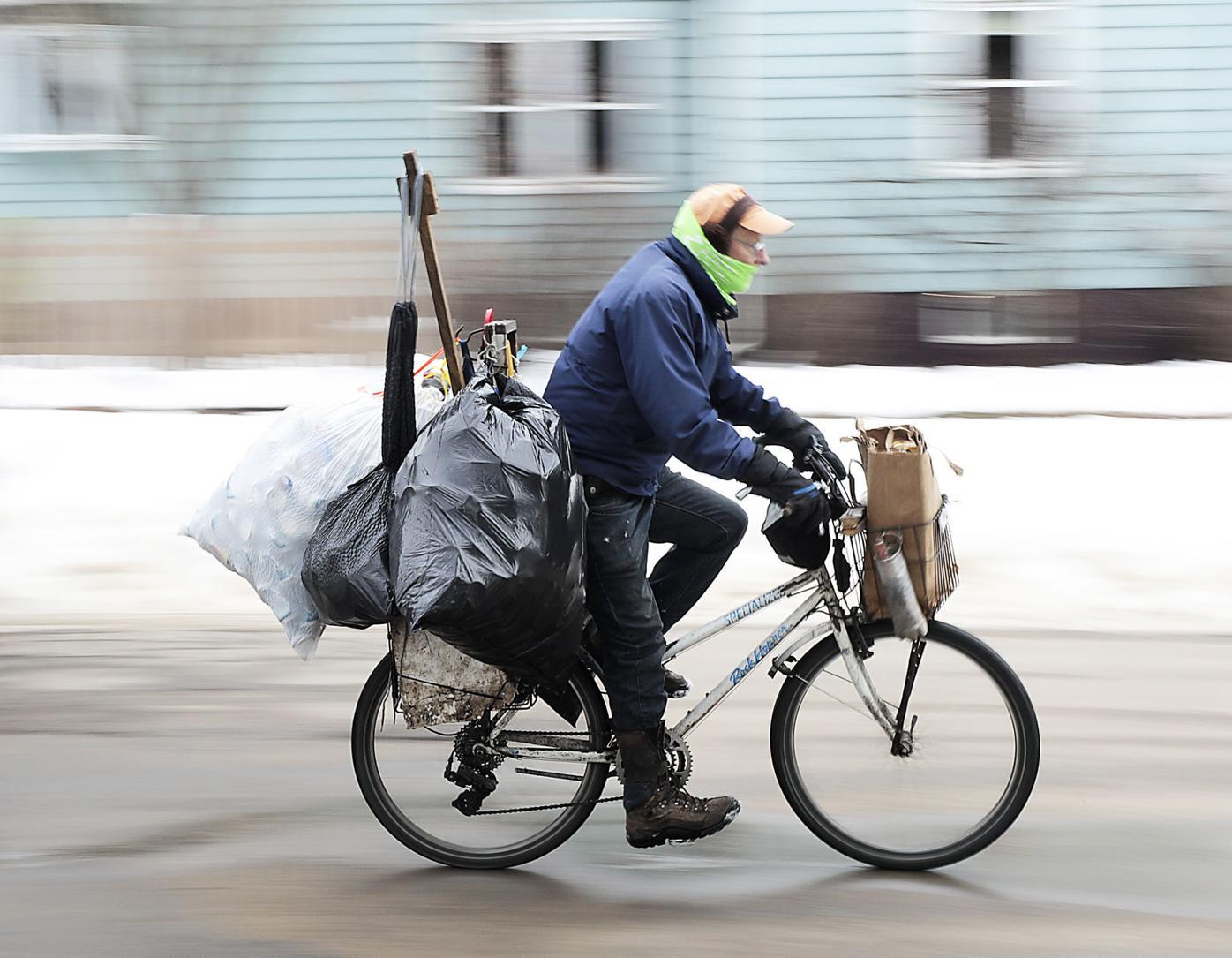 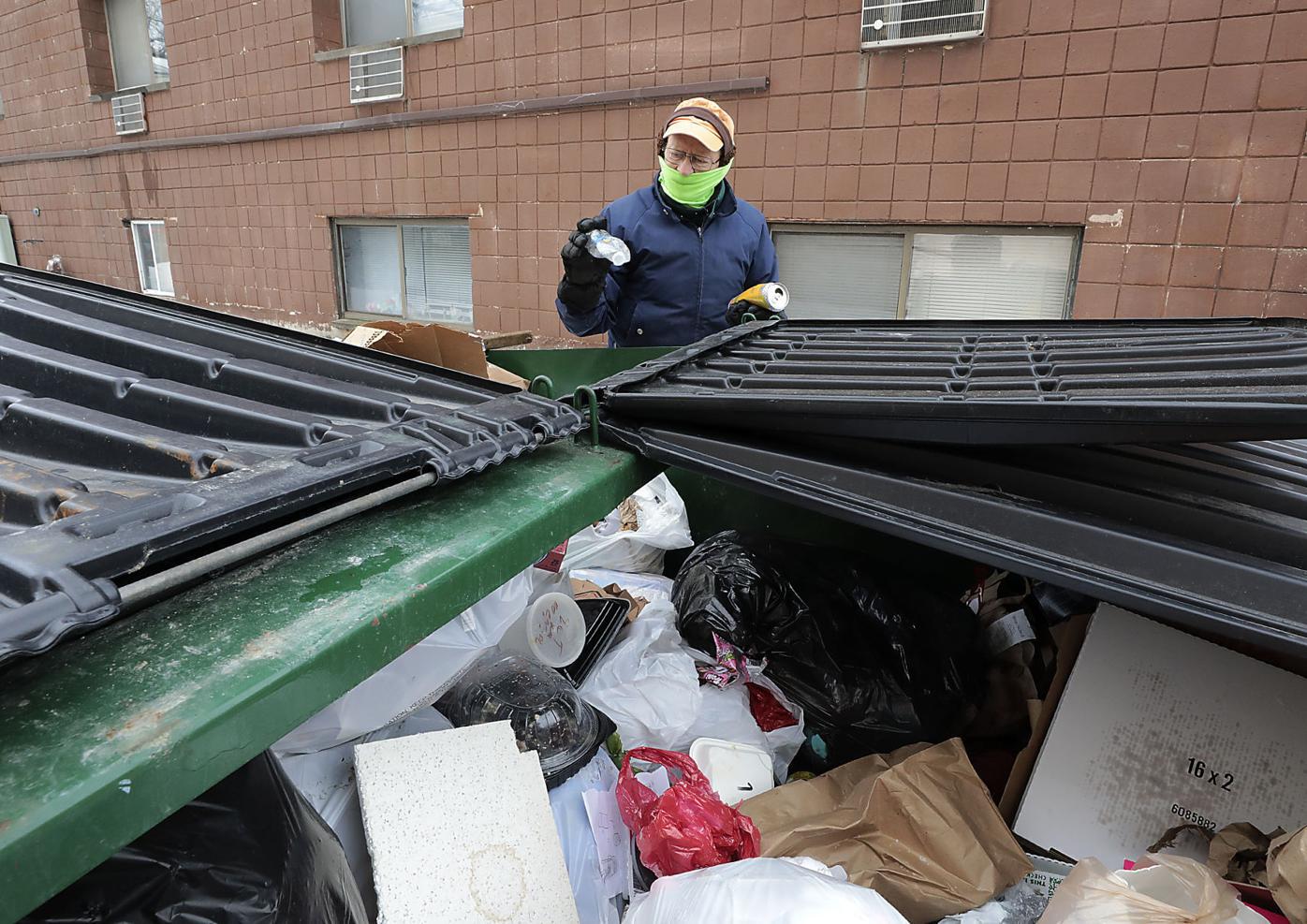 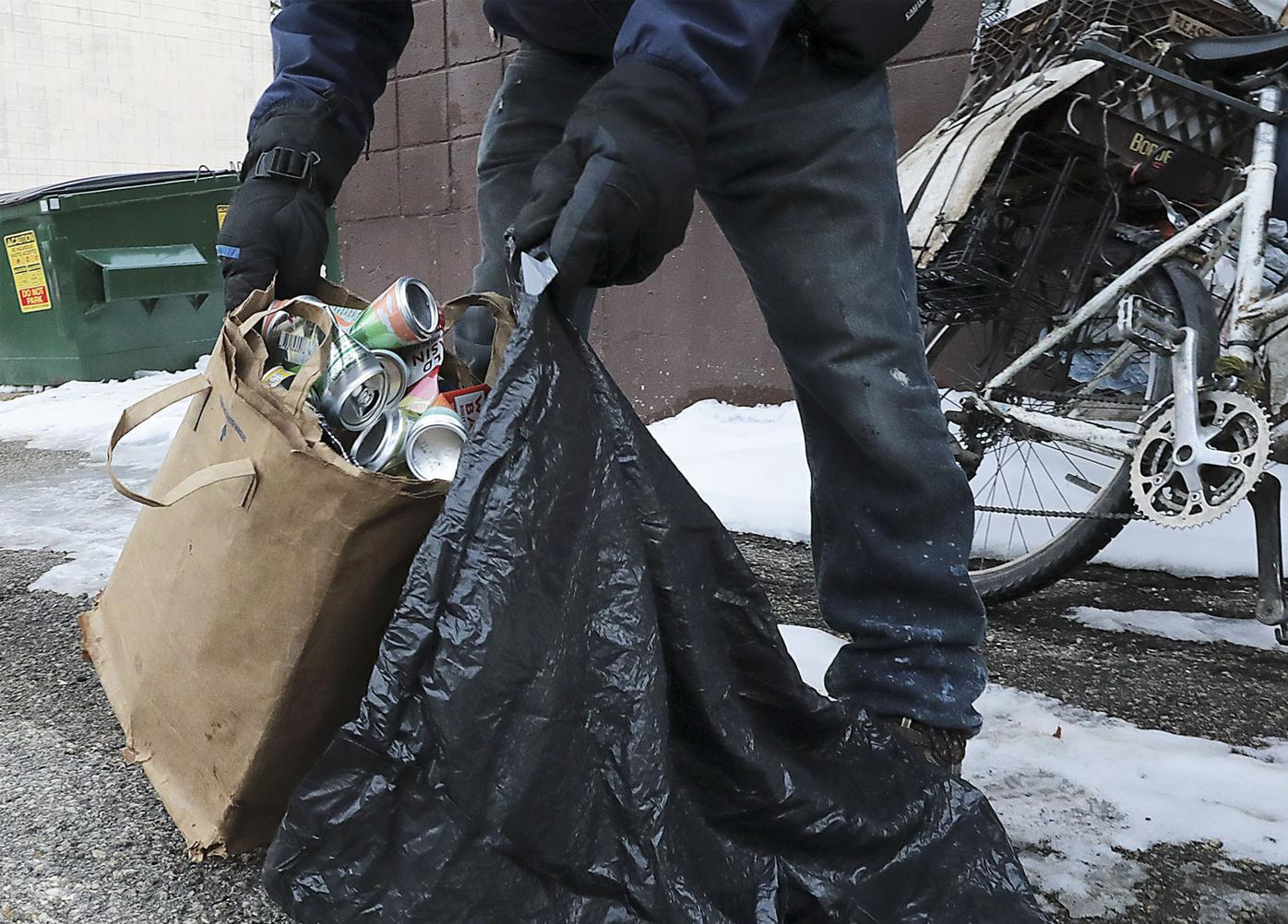 Gary Gates bags cans he retrieved from a dumpster along West Main Street. 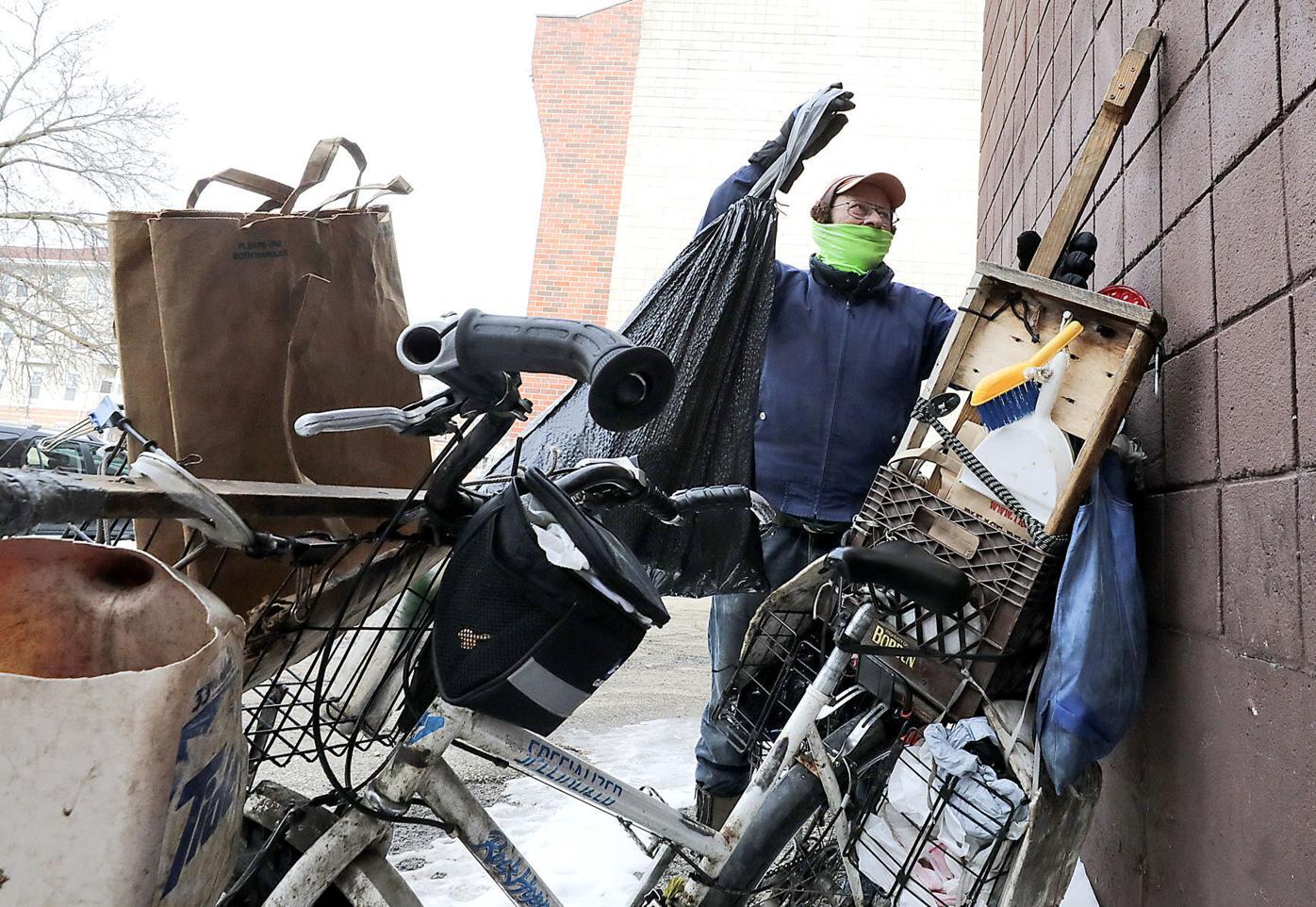 Gary Gates attaches to his bicycle a bag of cans he retrieved from a dumpster along West Main Street. 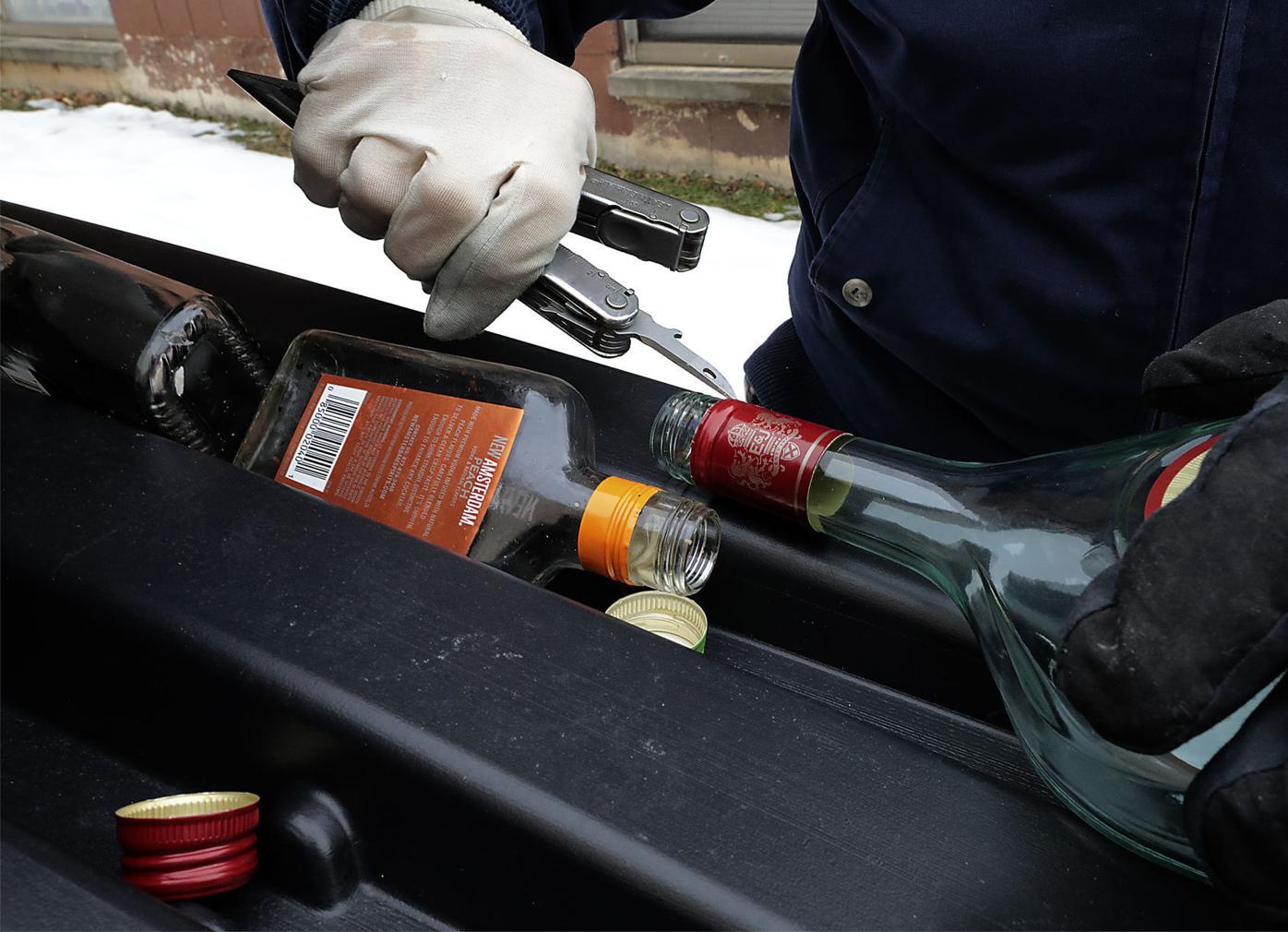 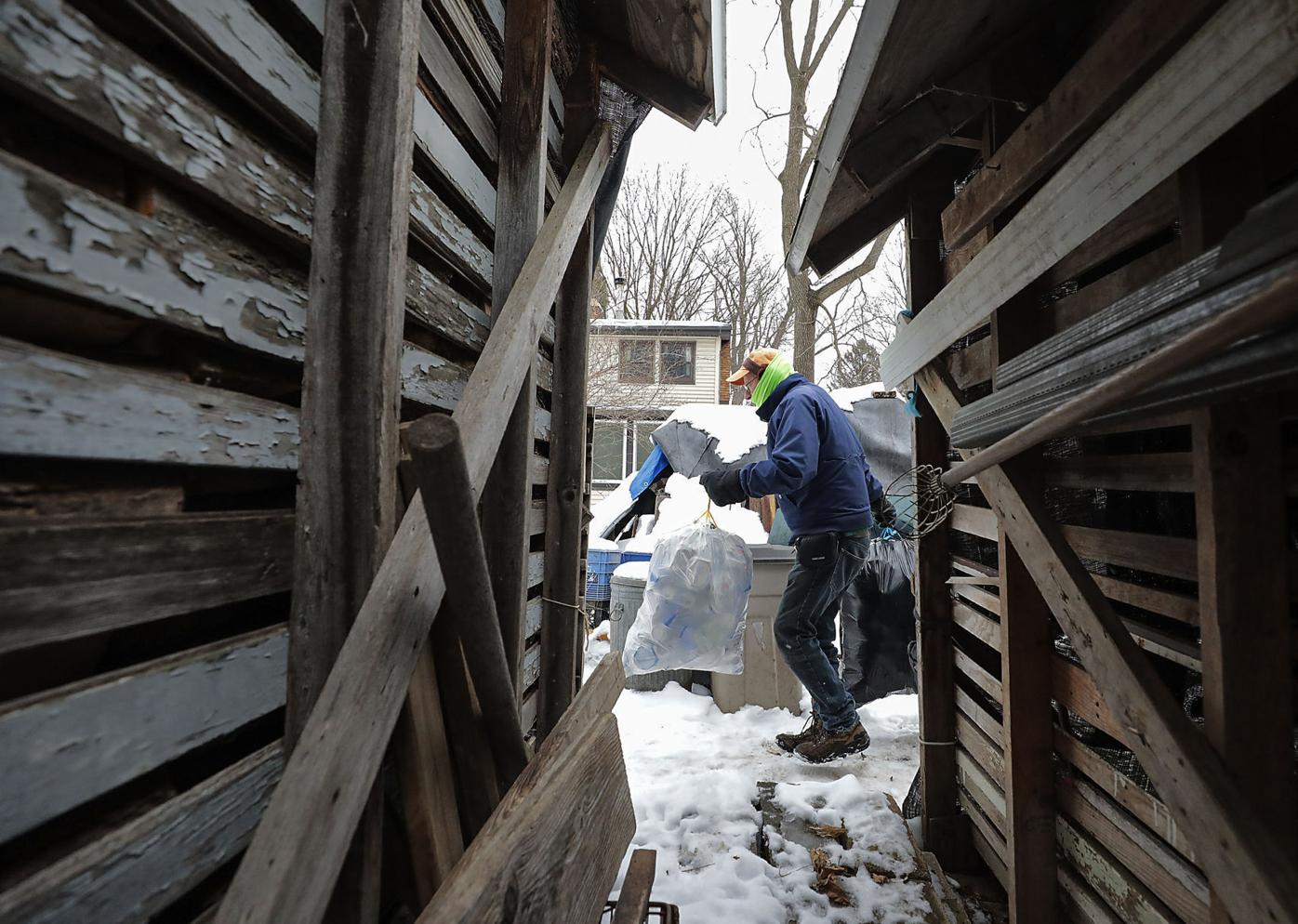 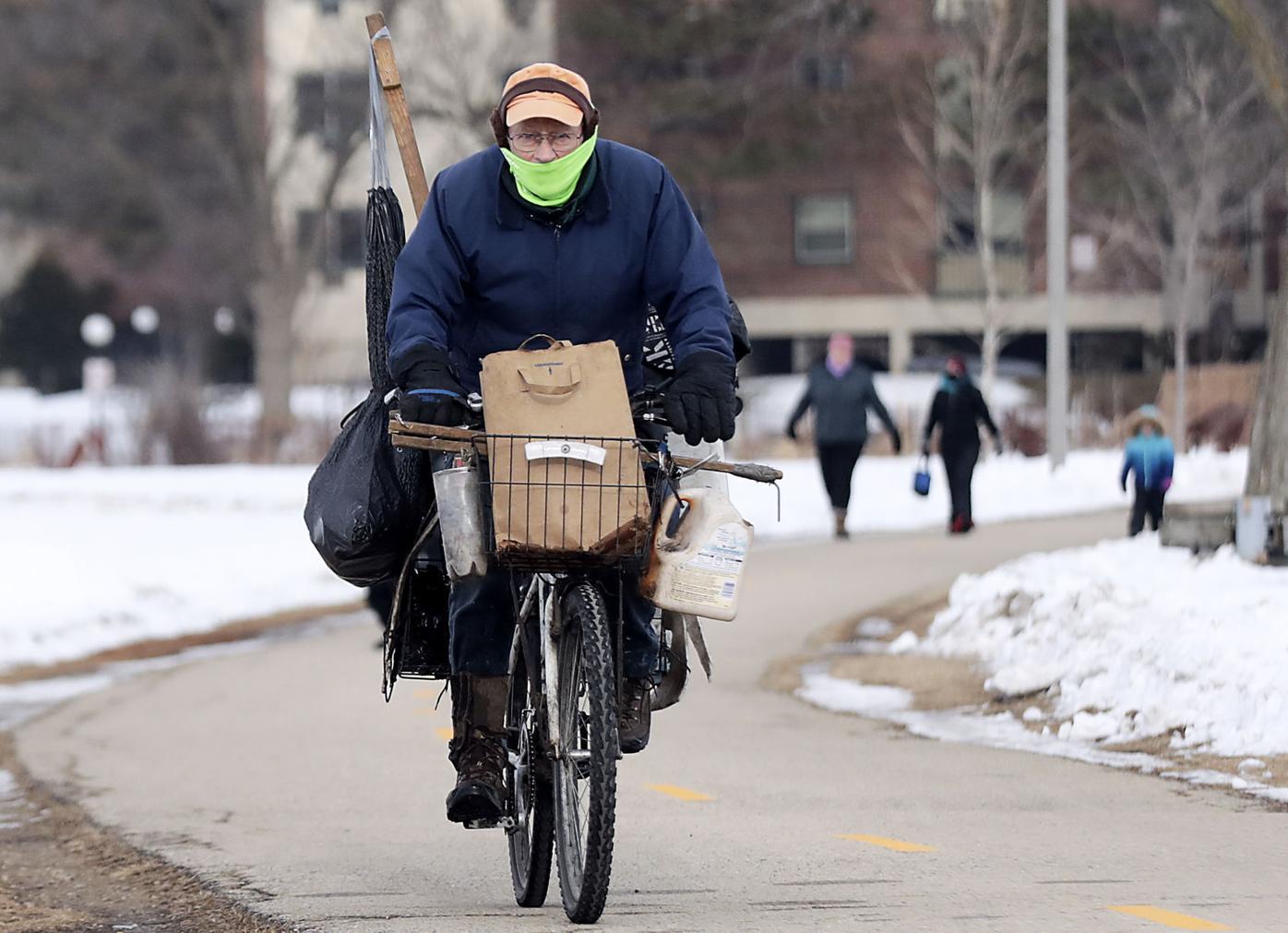 Gary Gates rides his bicycle through Brittingham Park after a can-collecting outing.

It’s easy to get the wrong idea about Gary Gates when he’s out scrounging in dumpsters, draining the leftover drops from beer cans and crushing them in his gloved hands.

In December, Gates, an extreme environmentalist, collected his 2 millionth can, but didn’t do anything special to mark the occasion.

“I just took them in (to the recycling center) and kept going,” said Gates, who rides his bike while getting cans and gives the proceeds to environmental groups and other nonprofits he and his wife, Pam, support.

Gates said he did tell a few people about his milestone and decided that he’s not going to work as hard this winter collecting cans as he has in the past. “Going out in snow and cold is no fun,” said Gates, fresh from shoveling nearly 5 inches of wet snow from the sidewalk and driveway of his home in the South Side Bay Creek neighborhood.

Gates became executive assistant of the state Department of Employee Trust Funds in 1968, and deputy secretary in 1972. He was named secretary in 1974 and held the job for almost 20 years.

After retiring in 1993, he turned more attention to can collecting, only taking cans that otherwise wouldn’t be recycled. Gates had begun in the early 1980s, when he and Pam were biking to work and picking up cans along the way. Soon he began keeping track of how many he collected and telling himself he could do better.

After he started collecting full-time, he “really got obsessed about it and darn near killed myself.” During his record year of 1998, he got about 250,000 cans.

Gates began by picking through trash cans in city parks. That led to apartment building dumpsters on Langdon Street, which was the motherload.

He started to learn which dumpsters had the most cans, and would frequent those. Gates also picks cans up off the street.

On a recent Wednesday with a high of 38 degrees, Gates rode to one of his “most productive” dumpsters on West Main Street, outside a large apartment building. There, he spent 45 minutes pulling out aluminum, not just cans, by slicing aluminum labels off alcohol bottles. He pulls out other items that should be recycled such as cardboard boxes, liquor bottles, beer bottles and 2-liter soda bottles, and deposits them in a nearby recycling bin.

He then takes nonrecyclable items that show up in the recycling bin and puts them in the dumpster. He said it’s not unusual for him to extract dirty diapers from the recycling dumpster.

Gates fills a tattered double paper grocery bag with cans, later transferring them to garbage bags he attaches to the “superstructure” on the back of his bike. The elaborate contraption includes a garbage can, a milk crate with hooks, and a tall stick from which he hangs bags of cans.

His main tool is a stick with a hinge to make it longer when necessary. It has a thick bent nail on the end. Gates uses it to pull out a red, knotted Capitol Centre Market bag. He slices into it with the nail, and sorts through the cans inside.

Picking up a thin, wet plastic bag with some unknown substance inside from the ground near the dumpster, Gates said, “some apartment managers don’t like me here.” There’s one manager who appreciates him, Gates said, “because I’m making things neat.”

He avoids the buildings where he’s not wanted. Once, years ago, one apartment manager “did call the cops on me,” Gates said.

Gates used to get cans from all over the West Side and the UW-Madison campus, but now he’s restricted his territory mainly to West Mifflin Street, West Main Street and Brittingham Park, areas that are on his route Downtown.

Gates has been able to track his total because at All Metals Recycling on South Park Street, where he brings his cans, 27½ regular aluminum cans make a pound. The number isn’t precise, he said, because some cans are bigger or smaller than the typical 12-ounce can.

Sydney Runde, who’s worked as an office assistant at All Metals for 3½ years, said the business gets about 100 recyclers a day and Gates is one of the “regulars.”

Runde said she had no idea the “sweet, older guy who brings us cans on his bike” spent 19 years running Wisconsin’s multibillion-dollar pension system, long a model for other states.

Bob Lang, director of Wisconsin’s Legislative Fiscal Bureau, who worked with Gates when he was running the fund, called him a dedicated public servant who worked tirelessly during his tenure at the Department of Employee Trust Funds to ensure its integrity and sustainability.

“I believe that when he retired, he stated that when he died, he would like his gravestone to read, ‘He kept the Trust.’ A fitting tribute,” Lang said.

Gates said he was referring to employee trust funds, but adds that he’s kept the trust in other ways, too.

He doesn’t want to claim too much credit for keeping the retirement fund on good footing. It was doing well when he took the job and he said he helped keep it there. “There are a lot of people in Wisconsin who were intent on having a sound fund and not having it become a liability over the years.”

It was a constant fight protecting the fund from officials who wanted to use the money for other purposes, Gates said. “That’s the way you build up liabilities that you can’t handle. ... That principle was established long before I got there. I just helped maintain it.”

Gates served one term on the Madison City Council from 1979 to 1981 and introduced a resolution to support parole for Karleton Armstrong, one of four men who bombed Sterling Hall in 1970. Madison was then at the center of the protests against the Vietnam War, and the bombing of the Army Math Research Center in Sterling Hall killed a young physics researcher. The resolution was adopted, and within months Armstrong was paroled.

Gates said he averages about a dollar an hour gathering cans. “I’m not doing it for the money,” he said, adding that bike maintenance can wipe out his earnings. He said major repairs last year cost $350.

When people offer him money, he says “no thank you” and tries to explain his recycling passion. But sometimes they’re so insistent that he takes the money and donates it elsewhere.

He and his wife give between $40,000 and $50,000 each year to about 40 organizations. In 2020, that meant $12,000 to the Nature Conservancy, the organization that gets the most each year. Doctors Without Borders and Access Community Health were among the other groups that got money.

Gates once came across a dumpster full of food, primarily in cans, so he brought it all home, even though it weighed down his bike. He’s even found money in dumpsters. Usually it’s coins, but once, a long time ago, there was a $100 bill. “People throw things out and don’t realize what they’ve got in there. You go into the apartment building dumpsters, and somebody has moved out and all their stuff gets tossed in the dumpster.”

Most of his clothes come out of dumpsters, Gates said, while wearing a pair of blue jeans he found that way. Pam also has a “fair amount” of dumpster finds, and recently got a nice jacket. Gary said he’s found four leather jackets that he’s given away.

“I have jumped in the dumpster for one thing or another, but I don’t do it very often,” he said.

Pam, 75, said she uses lots of the found clothing, adding that they’ve given some to relatives and friends. “If things fit, I’ll wear them.”

The couple’s been married for 38 years. Pam, who used to work for the former Madison Times weekly newspaper, now does volunteer work at The Beacon homeless day resource center, and with MOSES (Madison Organizing in Strength, Equality and Solidarity) to improve prison policies. She was former director of the Madison Literacy Council. She said she hasn’t gone out can hunting with her husband in years, but calls his pastime “very admirable.”

“He’s keeping down the amount of stuff that’s going into the landfill, reducing the waste,” Pam said. “We’re a very wasteful culture and I’m very proud of what he does.”

Gates once collected cans every day, but now it’s less frequent. In the spring, summer and fall he collects cans five or six days a week. During winter, he said he’s lucky to get out once a week.

This article originally ran on madison.com.